Recently, it's been widely reported that Uber is establishing a New York office for the express purpose of building out a financial services division.  In most articles, the main driver for this has been cited as their cost of card acceptance.  In the company's S-1 form, filed as part of their recent IPO, the state their credit card processing fees increased $288 million to $749 million or a 38% increase from 2016 to 2017.  No doubt, driving this cost down is important.

The question I want to explore here though is why, other than driving down the cost of acceptance, is it so important for an entity like Uber to control its financial services?  After all, this is not a fintech company, it's in the business of efficiently moving people and products from point A to point B.  So, this reminds of me of how The Disney Company originally setup Walt Disney World in Orlando, Florida.  First of all, it was granted its own Improvement District called Reedy Creek.  This gave it governance control over its operations within this geography.  Next, it setup and ran its own phone company, power company, police force, and fire services.  With these key infrastructure components under its control, the company could essentially do whatever it wanted without interference or transparency and the expense it paid was an accounting entry distributed across its enterprise.

Eventually, all but the Reedy Creek Improvement District were essentially dismantled since running these utilities for a company the size that Walt Disney World has become was unsustainable.  However, I use this as an example of the importance of controlling essential infrastructure and that's what financial services are to a company like Uber.  The complexity of their payments eco-system and the central role it plays in the company is such that it has become necessary for it to own more of the assets required to deliver the range of payment services it needs.

This is a strategy quite distinct from that of our multi-national retailers, like WalMart for example.  For a company like WalMart, reducing its cost of acceptance is the critical activity, but the rest of their payments ecosystem is not much different than any other large company and is handled in a fit-for-purpose manner.  However, payments are a core service differentiator for Uber representing both acceptance and delivery activities.  Comparitively speaking, one can consider how Stripe has expanded to see how financial services as infrastructure operates as a business model. 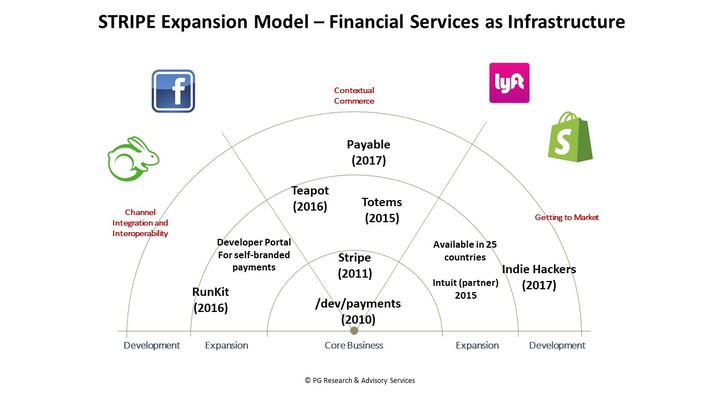 From this overview, one can see that rather than expanding through acquiring large sets of merchant accounts, which is a traditional transaction-based acquiring model, Stripe has grown through its services.  Specifically, its services to start-ups and on-demand companies like Lyft and TaskRabbit.

When we begin to look at payments from this perspective, it changes the view from one based on transactions to one based on integration into an eco-system.

I believe this is what is ultimately driving Uber into financial services and why it bears watching, because this kind of eco-system is exactly what legacy financial institutions need to create in order to compete in the future.

Thus Uber could be poised to show large corporates with highly complex payments profiles how they can control much of the assets they need to efficiently operate their business; a disruption multiplier even if only within reach of the few.

Coming back to what is perhaps a key driver, and that is the cost of payment acceptance, the more assets ones owns, the more likely it is that they drive that cost down.  Consider Chase for example, and how they were able to use their considerable market muscle to force Visa to the negotiating table.   We, in the payments market, like to think of ourselves as innovative thinkers and many are, but the market still operates in a transactional manner.  That is changing, slowly, but Uber could accelerate this by showing us how it might be done.